The Million-Dollar Pool in Maclean's Magazine

(...) Phineas, a century ago, acquired the Million-Dollar Pool with a pinch of gunpowder and a small charge of buckshot.

New Brunswick, at the time, was having a boundary dispute with the Province of Canada (Ontario and Quebec). As you hear it in the Restigouche Valley, the governors of New Brunswick and Canada both liked to fish, so they turned the argument into an excuse for journeying down the Restigouche together. Tey figured they could look over the border locale personnaly - at odd moments when the salmon were refusing to rise to the fly.

As they reached the point where the Patapedia enters the Restigouche, there was a loud report and lead tunnelled into the water ahead ot their canoes.

"Come in here, you fellers," shouted Phineas Wyers who stood on the shore flourishing his blunderbuss. "I want justice and, by crickey, I'M going to get it."

"I know it," snapped Phineas. "Listen here, guv" - he addressed the governor of New Brunswick - "I've got a greivance that I want fixed up right here and now."

Prodding the viceregal chest to drive home his points, he told how he'd been promised the grant of a certain piece of land which had subsequently been given a man who had more influence with the New Brunswick Government.

"Woe unto policicians," sighed the governor, "Well, come with me and I'll see if you can't be fixed up."

So phineas climed into the canoe with the governor of New Brunswick, and the tall timbers echoed with laughter as they swapped tall tales. In the end the old woosman obtained all the land aroud what is now the Million-Dollar Pool, and $100 in cash to compensate him for the way he'd been treated. 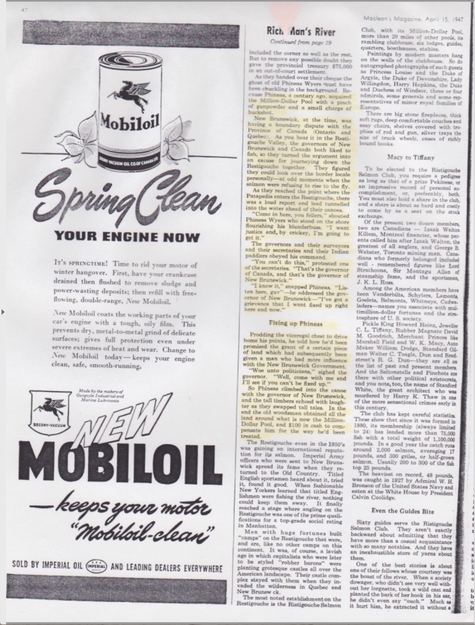